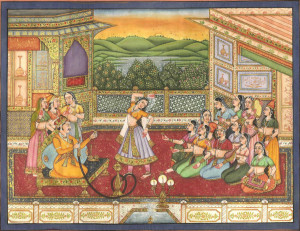 The miniature painting art form is famed across the world but in the Asian subcontinent art historians consider Rajasthan to be one of its cultural centres. Historians believe the Mughals to be the importers of miniature painting to India from Persia. Humayun’s team of Persian artists established the foundation of miniature art painting, while Akbar gave them patronage and had them train Indian artists to create art representing the royal Mughal life.

Rajasthani miniature painting evolved from the Marwar-Mewar region, being initiated as illustration to Jain text in the 15th century. This is why these paintings show echoes of the art styles used in the Ajanta murals and Gujarat Jain art. The Jain art influence reached its peak in the 1555 AD Bhagavata paintings, and went on to inspire many different art styles in the region.

The royal courts of Rajputana gave birth to what is now known as Rajput painting. While different kingdoms had their own unique styles, common themes include depiction of Hindu epics, Krishna’s life, landscapes, and people. Miniature paintings were performed in manuscripts or single sheet form, so that it could be stored as an album. It was also painted onto palace walls, fort chambers, and havelis.

The colours were completely natural, created from naturally occurring minerals, plants, conch shells, and even precious stones. Gold and silver were used for ornamental touches. Due to the tiny nuances of the art form, there is great care in the material used for paint and the surface to be painted. To this day, you can find squirrel hair brushes and completely natural ingredients used for paints.

Rajasthan’s Kishangarh province is famed for Bani Thani miniature paintings, an influence which is represented through exaggeration (long necks, large eyes, and long fingers) to often depict the divine love of Radha and Krishna. Raja Sawant Singh, an 18th century king gave great patronage to the art form, and it was his love for a girl named Bani Thani that inspired him to have himself portrayed himself as Krishna. Bani Thani addresses royal life in all its glory, including portraits, court life, music and dance, and important Hindu festivals like Holi and Diwali.

Bundi paintings were significant in their rich portrayals of Krishna-Lila and Rasikapriya, and yet used Mughal influences. Additionally, the paintings depict local legends, events and village and royal scenes. The nuanced interplay of delicate lines and bright colours, as well as imaginary landscapes put Bundi art a league apart.

Influenced by Bundi paintings, Kotah paintings depicted the stories of Lord Rama and Krishna, but was much more varied in depicting festivals, hunting, nature and emotional situations.