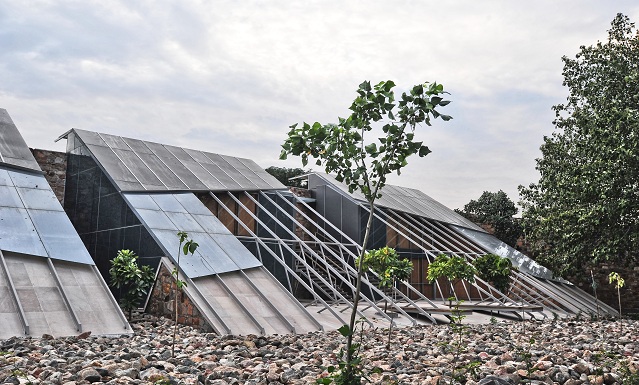 Recently, Mana Ranakpur and Architecture Discipline, the firm responsible for designing and creating the magnificent resort in Ranakpur, Rajasthan, were in the limelight, having been covered in the February 2012 issue of the reputed Indian Architect and Builder Magazine. The article, written by Ruturaj Parikh, also featured quotes and explanations from the Principal Architect, Mr. Akshat Bhatt who explains the unique style and structures at display. An excerpt from the article follows:

“In the first encounter, the idea of vertical, robust walls in local stone overwhelms the conceptual intent of the design. Slowly though, the details come into focus. The slender steel, the lightweight glass and the visibly minimal objects that complete the vocabulary act as complementary elements to the walls. The opposites of controlled construction in steel and glass to a completely organic arrangement of stone in the walls stabilise the structure

giving it integrity and austerity in equal measures. “Architecture comes alive at all scales,” says Akshat.

The contrast is intentional and the effect is delightful. At night, when the place is illuminated, the importance of restraint is highlighted as a wealth of carefully selected elements and dedicatedly designed objects reveal themselves. Architecture Discipline designed and made the lighting elements, the furniture of rubber-wood, and an intricate pattern on glass that shields the indoor space from the harsh sun, acting like a mesh that cuts glare. 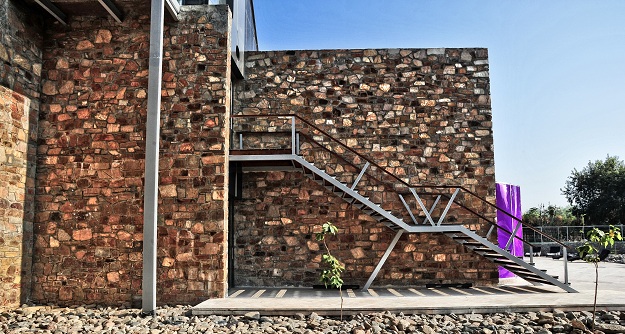 The softness of wood is balanced by the apparent hardness of steel. The transparency of glass is negated by the heaviness and opacity of stone. Carefully placed openings distinguish accidental and surprising scenes of the landscape by framing them. The sky is framed by the glass roof. To cut heat, a massive stone wall on the west is introduced as an element. Selected objects of art mark points of interest in the scheme. When the architects say “the walls tower over and the entrance is nestled between two 12m-high walls within a glass cube which feels delicate and fragile”, the intentional juxtaposing of materials, objects and spatial elements is understood. The same juxtaposing is extended to the planning of the site. As the main block with a three-storey hotel occupies the central space, the villas are organised in a separate row. The plantation is controlled but apparently random which adds to the idea of surprise. Vantage points are subtly defined but carefully treated for effect.

On a closer and a retrospective observation, one understands that the architecture did not happen by permutations and combinations. The complete design from planning to completion is a result of intense strategising – starting initial sketches on site to detailed analysis the term involves in; from choosing a material palette to pondering on design of objects and ambiences. Innovations on similar lines are extended to encompass lighting, landscape and furniture. “The daytime temperature of Ranakpur is lower than most of Rajasthan, yet the direct sunlight had to be dealt with. In response to the climate, the entire west facade has thick cavity walls. The sloping roofs posed a greater challenge, to allow a view of the sky through the day yet mitigate heat gain. Perforated film was pasted on multiple layers of glass to create a pattern reminiscent of traditional Jaalis,” says Akshat. 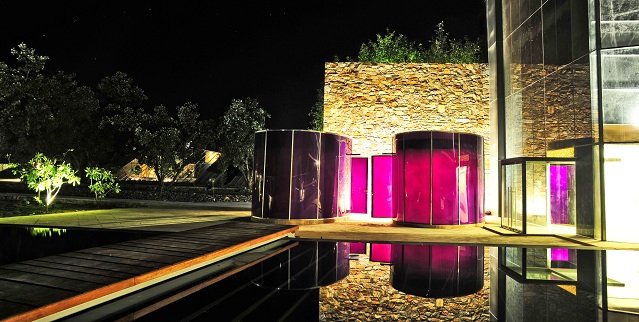 A significant innovation in the HVAC system which re-directs the air from an underground network of designed ducts to naturally cool air was an innovation worked upon for three years to substantially reduce air conditioning loads. An apparently simple system, the improvisation becomes a significant detail of the overall design planning. The fresh air system in the public areas use the underground water table as a heat reservoir wherein, a heat exchanger cools air passing through the ducts re-directing cool air to the public areas. The roof acts as a structural system for solar panels.

The furniture is simple, modern and the effect of wood humanises the space. These objects are lovingly crafted and one can appreciate the detailing and effort that would have made this possible. Detailing is, on the whole, the strength of design and architecture of Mana.

Mana is thus experienced as whole and in parts making each experience complementary to the intended effect. The sum is a very refreshing built environment and architecture that does not impose but impresses through the energy and effort that would have gone in the making.”

One Reply to “Mana Ranakpur in Indian Architect and Builder, Feb 2012!”