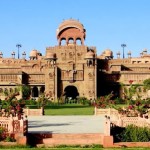 Nestled between the lush green valleys, beautiful fountains and elegant lily ponds, Laxmi Niwas Palace is one of the most beautiful palaces in India. The palace, located in Bikaner, Rajasthan is a true master piece of Indo-Saracenic Architecture. It is totally carved out of red sandstone and is a major tourist attraction in Rajasthan. The opulent palace is the perfect blend of Rajasthani tradition that takes the visitors on a vintage tour.

The Laxmi Niwas Palace was originally the personal residence of the Royal King of Bikaner, Maharaja Ganga Singhji. The rooms of the palace have been designed keeping in mind the needs of the royals; it is luxurious and was used only by the members of the royal family and the personal guests of the Maharaja who were of the same status. Every single room in the palace has lavish decorations that reflect the royal taste of the Maharaja in arts and aesthetics. The walls of the rooms are adorned with gold wall paintings and the ceilings made of wood have intricate carvings. 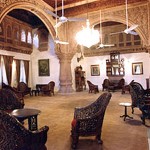 Maharaja Ganga Singh envisioned the palace and he personally overlooked the construction of the palace building. The palatial residence that is build around the central courtyard was designed by Sir Swinton Jacob. The design has intricate carvings right from the bottom to the highest point of the dome. The ‘Jali’ (stone) work done is simply stunning and is a huge hit among both the locals as well as the tourists. If you are visiting the palace for the first time, the motifs and floral decorations would surely leave you mesmerized.

The fine and intricate lace work done on the edges of the stones on the roof was designed in a way that it looks as a glittering crown of the palace. One of the major highlights of the royal Laxmi Niwas Palace is that it has a huge and awe-inspiring main entrance. The clock tower at the entrance would take you back in time and evoke memories of the old splendor and grandeur that Indian Maharajas were known for. 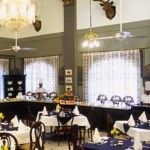 Today, the Royal Palace is turned into a Five Start Hotel and you would have to drive through long pathways that are flanked by lawns and rows of trees to reach the hotel. The grand Portico that extends from the gate exudes a warm feeling and welcomes the visitors in a royal way.

The huge garden area that is right at the centre of the palace coupled with the magnificent fountains is a great cynosure to the eye. The courtyard is surrounded by rows of columns along the corridors and they present an astonishing view that would keep the visitors’ attention arrested for long. Along the walls of the palace you would find rare trophies and images of the relics of the Rajputs. 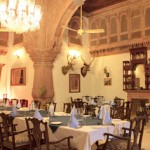 The Laxmi Nivas Palace hotel still maintains the old and original paintwork that adorned the ceilings during the times of the Maharaja. Today, the rooms of the palace hotel have been refurbished to make it look more eclectic and suit the taste of the contemporary visitors. You can find all the modern amenities you would find in any other 5 start hotel. Truly, the Laxmi Nivas Palace Hotel is the crowning glory of forts and palaces in Bikaner.