Rajasthan is one of the most beautiful tourist destinations in India. The state, which is home to some of the most magnificent monuments in the world, attracts a large number of tourists all year around.

One of the most popular forts of Rajasthan that attracts millions of tourists from all over the world is the majestic Junagarh fort of Bikaner. The fort was originally built during the 15th century by the then ruler of Bikaner, Raja Rai Singh. The fort was initially known as ‘Chintamani’ and it was then later renamed as ‘Junagarh’ in the 20th century when the royal family that ruled Bikaner moved to the Lalgarh Place. The term ‘Junagarh’ literally translates into ‘Old fort’ in the local language. 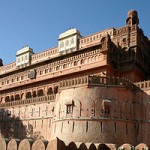 This monumental fort is a reflection of the historic charm and the architectural splendour of Bikaner. The fort has massive defensive towers for protection of the royal family during times of battles. The impressive architecture reflects the skills of the craftsmen of that era. 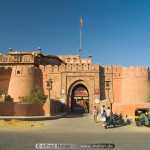 The gates of the fort are fastened by Iron gratings and have sharp spikes that protected the gates against the ramming elephants of the opposing armies. The fort has the distinction of being one of the strongest forts in the plains of India.

Today, while the fort stands tall in its resplendent glory. According to local stories, it took 16 consecutive generations of the rulers of the Bikaner to complete the construction, so make sure you visit this monument to Bikaner’s royal past, the next time you pass through!