Located in the middle of Jaipur’s Man Sagar Lake, Jal Mahal is an architectural marvel of Rajasthan. In 1596, the area was hit by severe famine and the ruler of Amer, Sawai Man Singh I constructed a dam, forming Man Sagar lake between two hills and the dam. In 1799, Sawai Pratap Singh built Jal Mahal, the island Palace in the middle of the Man Sagar Lake as a pleasure resort. Royal duck shooting parties used to be held here. 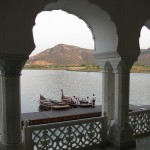 Maharaja Jai Singh II renovated and enlarged the palace and the lake in the 18th century. During the renovation, the Jal Mahal was bestowed a grand makeover. Conventional boat-makers from Vrindavan prepared Rajput style wooden boats which take visitor to the palace. Once inside the Jal Mahal, you move past the embellished hallways and chambers situated on the first floor. The climb leads to the aromatic Chameli Bagh. The view from the top is splendid. At one side is the majestic city of Jaipur all drenched in pink and on the other side, the stately Aravallis are dotted with temples and forts.

During the renovation, the most remarkable changes were made in the lake itself. Its depth was increased by over a metre, a process in which two million tonnes of toxic silt were dredged from the bottom. A water treatment system was also introduced and five nesting islands for attracting migratory birds were created.

It was during this era that several other historical and religious places like the Amer Fort, Jaigarh Fort, Nahargarh Fort, Khilangarh Fort, Kanak Vrindavan Valley, etc. were also built in the vicinity of the lake. All these places now make a part of the tourist corridor of the Jaipur area. 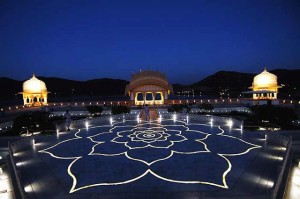 Jal Mahal is considered an architectural wonder. Built in the Rajput and Mughal style of architecture, it offers an amazing view of the lake, the Nahargarh Fort and the surrounding Aravalis. The palace is made of red sandstone. It is a five storied building. Four floors remain submerged in the water when the lake is full, with only the top floor remaining visible. On top there is a rectangular chhatri while the corners are adorned by octagonal chhatris. A garden with arched passages has been built on the terrace of the palace. Semi-octagonal towers stand at the corners. Now, a new terrace is being created based on a similar roof garden in Amer Palace.

How to Reach at Jal Mahal

The Jal Mahal is accessible from the Jaipur-Delhi National Highway No 8. It is about four kilometres away from Jaipur. Jaipur is very well connected to all major towns and cities of India by railways. Frequent flights to Jaipur are available from most metros. National Highway 11 serves as a road link of 366 kilometres from Bikaner to Agra via Jaipur. The lake is situated 8 kilometres away from Amer palace on the Amber – Man Sagar dam road to the north.

After massive renovation drives, the Jal Mahal palace is now open to visitors. Visitors can contact the site managers, Jal Tarang to inform them of their visit.