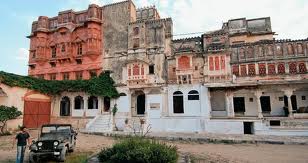 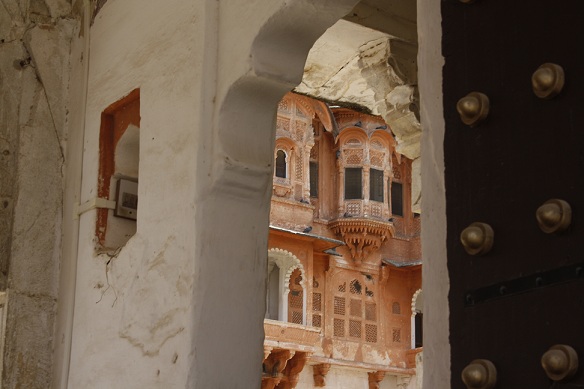 Navigating through a mesh of narrow twists and turns in the silent, dusty Rajasthani village of Ghanerao, I finally reached the gates of the most important building in the village. The afternoon was sunny and the huge imposing structure glared at us, almost as if announcing its grandeur and reiterating the contrast between itself and everything else in the village. This was the Ghanerao ka Raola – the haveli or castle of the royal thakur family that ruled this region for many years. It has now been made into a heritage hotel that goes by the name of Ghanerao Royal Castle. The white walled structure with red stone carvings is welcome and transports you into a charming world of lost royalty and decaying traditions of the noble Rajasthani families.

First impressions of the Ghanerao Castle

On the surface, the white of the walls is blackened in most places, the structure breaking away in parts but it continues to be home to the lineage of the royal family, once the thakurs of 48 villages around the and called the Raja of the Godwar region. Their lifestyle is still reminiscent of the olden days of glory, only sans the hustle and bustle of stately affairs. The Ghanerao Royal Castle has seventeen rooms to accommodate guests and is very popular with expats in the tourist season. 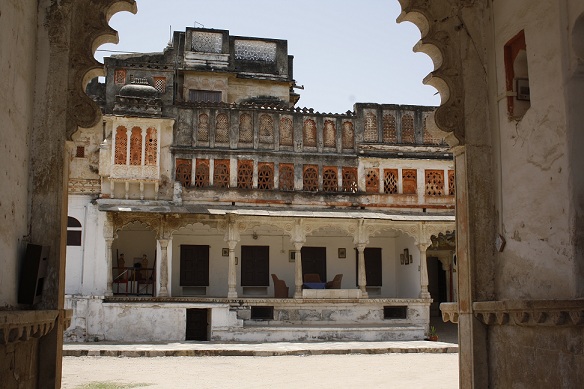 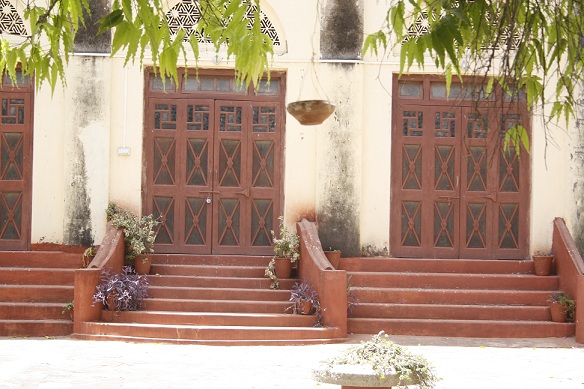 The architecture is typical of Rajasthani royalty and the building has several beautiful chambers. Towards the rear end, are the ladies chambers often known as the zenana, complete with a central courtyard, the walls of which adorned with flowering creepers and a huge tree in the centre. The large dining hall has been arranged to serve buffet meals to guests and its walls are covered with paintings and photographs of a bygone era; reminding everyone of the times gone by. There are numerous stories to be found in these pictures, enough to make for a potentially gripping book on the History of Godwar. The corridors, staircases, and beautifully chandeliered rooms; all sport various artifacts from the family’s past, including humungous kitchen utensils, hunting arsenal, hats and wooden frames. The central courtyard of the castle however is the most exquisite. A charming marble pavilion, it was the place where the palace musicians would perform for the royalty and their guests. The furniture is also entirely antiquated and the huge wooden doors spell finery. Characteristic of Rajput architecture, the marble jharokhas and balconines add grandeur and glamour to this picturesque red-stone structure, which is invariably covered by a flock of pigeons. 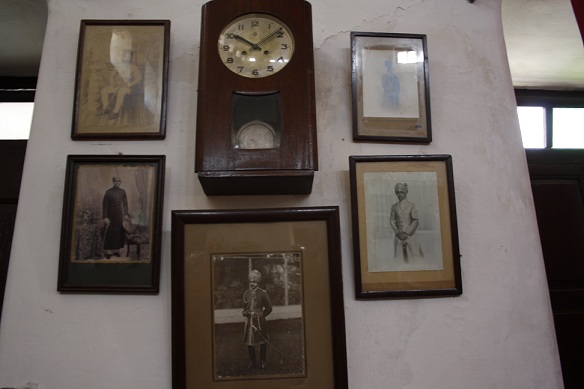 From the terrace of this beautiful castle, one can see the whole of Ghanerao along with some of the neighboring villages. From such a height, one can ascertain that Ghanerao was once beautifully planned and developed with lamps and statues. Adding to the mesmerizing view, on a clear day, the grand fort of Kumbhalgarh can be viewed from a distance. 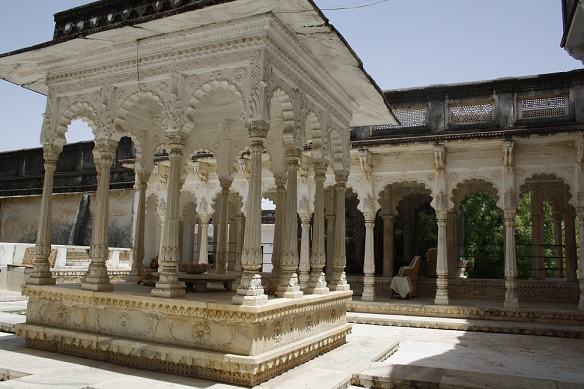 I had the fortune of meeting Prince Himmat Singh Ghanerao, a tall and broad shouldered, middle aged man with a Rottweiler in tow. As the Managing Director of the Palace hotel, he assured me with much pride that no part of the palace had been remodeled. Instead, he confirmed that all public spaces had been carefully restored to their original glory, to ensure that the guest could experience authentic royal living. Minor changes, however, have been made to the rooms to ensure the comfort of the guests. The royalty and grandeur of the palace are in place and even though the thakurs do not officially rule over the villages anymore, the family is still respected among the villagers of this region, the head of the family still addressed as ‘Rajaji’.

The family also owns a hunting lodge situated six kilometers away near the Mucchala Mahaveer temple and packages are available to guests to go on jungle safaris from this lodge in the middle of the jungle. 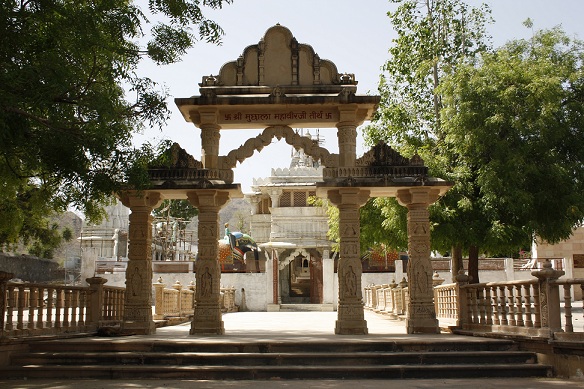 About the Village of Ghanerao

The village of Ghanerao is a colorful village boasting 11 Jain and 16 Vishnu temples and celebrates many festivals throughout the year. One interesting ritual involves the patriarch of the Royal family integrally. On the date of Vaishakh ki Chaudas every year, there’s a big mela (fair) held in the village, to celebrate the evil mythological king Hiranyakashyap’s downfall. Men dressed and made up as Hiranyakashyap roam around the village hitting the people with kodhas, starting with hitting the thakur in the morning. The whole village, especially kids and boys keep running after them and around them the whole day as they go on. Then, in the evening, just as the sun goes down, the play ends and they come back.

A brief stay in the Ghanerao Royal Castle shall provide a unique experience in grandiose royalty, a nostalgic charm and a lesson in history that encapsulates the story of the boundary between the Mewar and the Marwar regions of Rajasthan, and of how the Rajput clan of Godwar intermediated between the two.