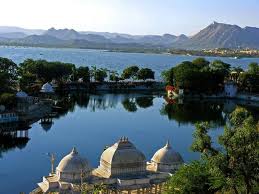 Amongst the many things that Rajasthan’s erstwhile Rajput rulers are famous for, the most glaring is their aggression. It was this aggression that enabled them to carve out beautiful kingdoms in the harsh conditions of India’s desert state. When you scan the landscape of Rajasthan, it appears as if every rocky patch of the Aravallis has its own fort and every lake its own palace.

Reflecting the life and times of the illustrious Rajput warriors, these forts and palaces showcase a history that should never be forgotten. The walls of the forts carry scars from turbulent battles wherein Rajput heroes fought with valour, chivalry and pride for land and honour. Their palaces on the other hand reveal the Rajputi fondness for luxury and beauty. In their quest for beauty, the Rajputs encouraged art and architecture that can be only described as mesmerising!

However, Rajasthan was not always the Land of Kings. It was once a desolate, deathly place called Marusthali where the armies of local chieftains fought many a formidable war and established many fragmented fiefdoms. The numerous wars resulted in the need for fortifications to define lines of defence. In many cases, the natural landscape of massive rocks themselves was used to define the area. The Aravalli hills were burrowed into creating many labyrinths of tunnels as attack and escape routes.

Their fortified kingdoms began to expand and the rulers had more time and riches to indulge in earnings. Soon artisans were hired and local labourers and prisoners of war were set to work to build beautiful cities. Eventually, these kingdoms became complete and self contained entities within their protective walls.

The thought process behind the cities that thus developed is fascinating and influenced greatly by the threat of war. What were once merely piles of rocks upon hillocks began to be dressed and chiselled into imposing masonry walls. The doors, ladders and battering rams were dictated by the evolution of the armies from infantry to cavalry and the walls continued to get larger. To prevent elephants from bashing the gates in, they added large metal spikes and the roads were always made winding to prevent a good run up and often, a total of 7 doorways had to be crossed to enter the city. Eventually, light catapults and artillery were introduced to warfare and provisions for massive cannons had to be made. With such a culture, it is not surprising that every fort in Rajasthan has been the site of a bloody battle, siege, intrigue or Jauhar (when the women committed mass suicide to prevent dishonour at the hands of the enemy).

Rest be assured, ostentation too found a place within these walls. Awe inspiring palaces were built for favoured queens, princes and princesses. The delicate carvings and exquisite frescoes on the walls set them apart. More often than not, the embellishments were done with gold and other precious and semi precious materials. Sometimes, the palaces were raised to provide a better view of the desert or better ventilation and were named after the elements of nature. The gardens were beautifully landscaped and usually included fountains. The public areas, like the courts for example, too were beautifully embellished. Eventually, Rajputi palaces became so elaborate so as to match the Mughal grandiose.