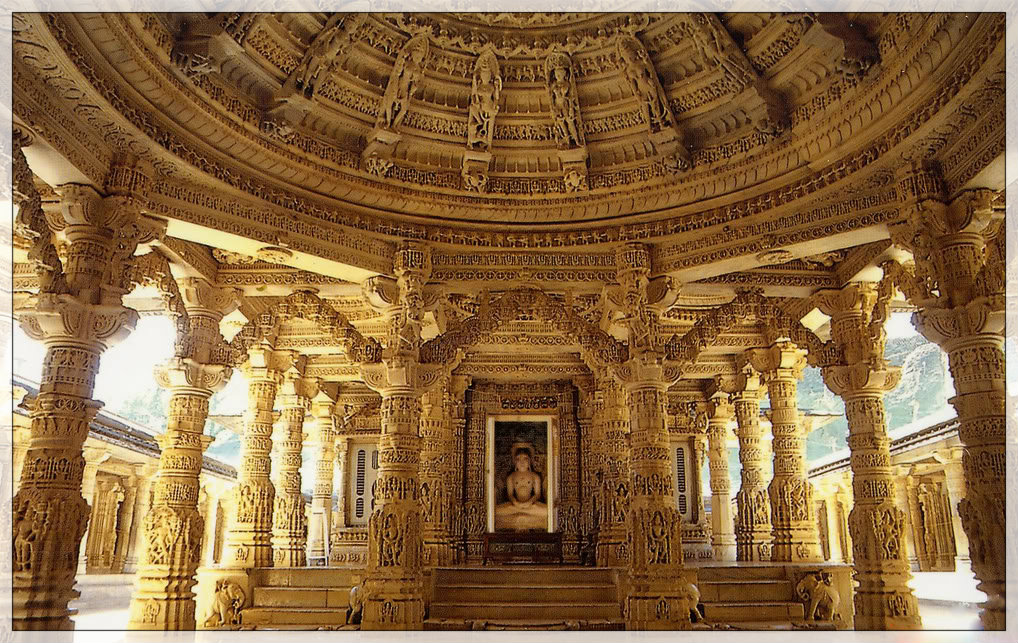 Rajasthan’s only hill station, Mount Abu, is located in the Aravalli Mountains. This makes it a popular getaway for vacationers in the region, as it promises respite from the desert heat. Apart from the conventional ‘hill station activities’, there’s a lot of sightseeing that can be done in Mount Abu.

The Dilwara Jain Temples, located about 2 kilometers from here, are a respected pilgrimage destination for Jains in the region and across India. The Dilwara Jain temples are located in the lap of nature, surrounded by the canopy lush green hills and mango trees. According to historical records, these temples were built between the eleventh and the thirteenth century AD.  Along with a regular influx of tourists that is steadily increasing, it is visited every year by devout Jains.  The white marble temples are said to be a dedication to Jain saints.

When viewed from a distance, one might wonder why these temples are respected so much for their beauty. Though the temples seem to be ordinary from the outside, it’s only when one steps inside them will one be able to marvel at the feats of artistry. The incredibly ornate marble stone carvings and the precise engraving on the temple ceilings and pillars are a photographers’ delight.

The ceilings feature ornate gold leaf work, and one will possibly need to zoom in with a pair of binoculars (photography is forbidden inside the temple complex) to appreciate the finer details of the ceiling paintings. The paintings depict the stories of Jain history and mythology. Open between noon and 3 pm, the entry to these temples is free. While there are other Jain temples across Rajasthan, the Dilwara temples are unmatched in their architectural perfection.

They are not only monuments – but fully functional temples that see hordes of Jains come to offer regular prayers. The temples have facilities for bathing, a necessary pre-requisite to the performance of ‘puja’ (prayer). In the winter months, the bathing facilities are heated by solar power for bathing.

The five temples have their own unique identity and are named after the villages they are located in. They are all dedicated to important Tirthankaras (saints).

Among these, Vimal Vasahi and Luna Vasahi are the most famed.

The Vimal Vasahi Temple is made completely out of white marble. It was made by Vimal Shah, a minister of a King of Gujarat, and is dedicated to Lord Rishabha.  The temple is famed for its corridors, pillars, arches, which feature miniature intricate carving. The ‘mandaps’ or the temple porticos are famous for their artistry. The Rang mandap, a grand hall, features ornate pillars and arches, an amazing central dome. The Gudh mandap is extremely simple, and houses the Adi Nath (or Lord Rishabdev’s) idol and sees regular prayer to the deity.

Luna Vasahi is dedicated to Lord Neminath. It was built by brothers Vastupal and Tejpal, who were ministers of a Vaghela ruler of Gujarat. The overall design is similar to the Vimal Vashi temple. The Rang mandap’s central dome features a massive pendent with ornate carving. 72 Tirthankara figures sit in a circular band and below them are small Jain monk figures. The Navchowki features stunning marble cutting. The Gudh mandap houses a black marble 22nd Jain Tirthankar Neminatha idol.

The remaining three temples of Dilwara (Pittalhar Temple, Parshvanatha Temple, and Mahavir Swami Temple) are small in size but match the elegance of the above mentioned temples.