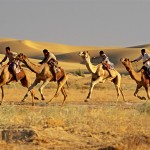 The Desert Festival of Jaisalmer is one of the most colorful cultural festivals in the country. Organized every year in the month of February, it has plenty of surprise and excitement in store for the visitor and is sure to leave them mesmerized. There are cultural events, camel races, and turban tying competitions, best moustache contests and what not. All this is accompanied by spellbinding musical performances by superbly talented musicians under the moonlit sky. The Desert Festival is a three-day long extravaganza during which the rich and vibrant culture of Rajasthan is displayed in its full glory. 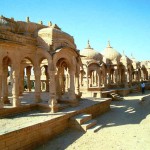 The hallmark of Jaisalmer, the “Golden City Of India” is the mighty 12th century golden sandstone fortress “Sonar Qila” built atop the Trikuta Hill and comprising 99 bastions. The city draws its name from its founder Maharwal Jaisal of the Bhati clan of Rajputs. The city is like an oasis in the Thar Desert and is known for its overwhelming cultures and traditions and lovely people.

The Desert Festival of Jaisalmer was first organized to attract foreign tourists so that they can explore different and vivid aspects of the desert state of Rajasthan in a limited period of time. The core focus of this three-day event is on highlighting the local elements and heritage of Rajasthan. The theme of all the events is quintessentially Rajasthan and the works of some of the best artists are on display. Local customs like turban tying add more charm to the festival and make it all the more exotic. Foreigners relish the Moustache Competition a lot, mainly because of the surprise value attached to this event. 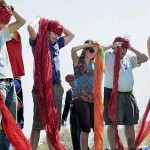 Then there are marvels like the famous Gair and Fire dancers who win appreciation from one and all. Mr Desert competition is also organized and takes the grandeur of the festival to a different level altogether. This is not all. The festival also has music recitals, performances by gymnasts (kalabaz), snake charmers, and entertaining puppet shows. During the grand finale, the patrons are taken to the Sam sand dunes where they enjoy camel rides and stunning performances by folk artists with the full moon in the backdrop. The entire setting is truly captivating.

It goes without saying that no desert festival is complete without camels, rightfully called the “Ship of the Desert”. Camels are integral aspects of a number of events in the festival. There are camel races, camel polo, camel decoration and camel dance. The Jaisalmeri camels are world famous for their speed and agility. 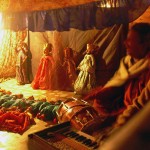 The Jaisalmer Desert Festival showcases the Rajasthani culture like no other event. Not only the Jaisalmer Fort, but also the entire city of Jaisalmer brims with excitement and the festivity can be unmistakably felt in the air. After three days of excitement, fun and frolic, a final musical performance by folk singers under the starlit, moonlit sky marks the end of this grand affair. Everything about the Jaisalmer Desert Festival is exotic and colorful and is sure to delight the visitor who will go home with unforgettable memories.