It’s pretty obvious that cultural tourism refers to people travelling to witness a new culture. The broad term of culture in this context can be simply defined as the lifestyle of the people in this region. As one can imagine, in a country as geographically, religiously and culturally diverse as India, the scope for a broad spectrum of cultural experience is high.

Amongst all the regions of India however, one that stands out and commands a great deal of attention owing to its vibrant and colourful culture, is Rajasthan. Rajasthan is literally the land of Rajas or kings.

India’s desert state, though parched for water, is drenched in a plethora of unique, almost exotic traditions that capture the fancy. In fact, one can say that Rajasthan’s harsh climate and terrain played a pivotal role in forming a culture that can be best described as resilient, romantic and mesmerizing.

Intriguingly, for most part, life in Rajasthan continues to be reminiscent of an ancient, simpler time. While the urban centres showcase their heritage with pomp and pride, the rural actually continue to live that life. 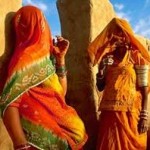 For starters, one of the first things that strike your eye when you enter Rajasthan is the native costume or attire for the people. Bright hues of against the yellow sand, the women of Rajasthan wear lehenga cholis – ankle length skirts with short blouses and a dupatta (veil) that covers their heads. The men on the other hand are often seen in dhotis (fabric tied around the waist to form pants), kurtas (long shirts) and padgis (turbans). The veils and turbans were first incorporated into their attire as protection from the severe heat. However, over time, the veil has come to be a symbol of feminine modesty and respect for elders; while the turban has now become an indicator of a man’s caste and class. More often than not, you will find the natives of Rajasthan dressed in beautiful shades of blue, red, yellow and orange – colours which they originally made from vegetable dyes. Rajasthan is also famous for its fabrics that are ideally suited to hot weather, beautiful embroideries, mirror work and intricate fabric dying techniques. 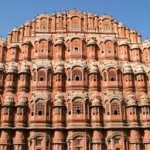 The next thing that will draw your eye will be the architecture. The land of kings will obviously have many palaces. Ancient palaces, forts, war memorials and victory pillars all form a huge part of Rajasthan’s cultural landscape. Each of these buildings has a unique story making them all fascinating to visit. Many of these buildings have been converted into museums or heritage hotels, allowing tourists to truly understand the details of royal life back in the day. Apart from these, Rajasthan has many beautiful monuments like for example, the Jantar Mantar which is an ancient observatory or the Johari Market which is one of the oldest market places in India. One thing that Rajasthan has no shortage of is religion faith. There are numerous Hindu, Muslim, Jain and Buddhist pilgrimage spots across the state, each built with painstaking reverence, affection and beauty. Above and beyond all this, the abode of the common man in Rajasthan also catches the eye. Havelis or private residences from the Shekhawati or Marwar region of the state are also a major tourist attractions.

Beyond the obvious, Rajasthan has some distinct traditions of performing arts, especially music and dance. The Langas and the Manganiars are the most famous amongst the state’s musician castes. There are many schools of classical music and the most unique element of Rajasthan’s folk music is that they literally have a song for every occasion in their lives; even for mundane household chores. Similarly, the people have a different form of dance for different occasions. The ghoomar and kalbeliya are perhaps the most famous amongst them. As if, all this wasn’t enough; Rajasthan is famous for various arts and crafts. For example, textiles, handicrafts, folk and fine art, intricately carved furniture, a variety of printing styles and dying techniques on fabrics, blue pottery from Jaipur, and beautifully mined and cut semi-precious stones.

One might think that this is all that Rajasthan’s c 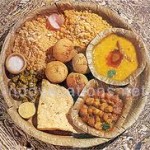 ulture might have to offer but that is not so. No trip to Rajasthan, or even India for that matter would be complete without a taste of Rajasthan’s gorgeous and decadent cuisine. If you truly contemplate the food in the context of the area of its origin even within the state, it becomes easy to understand how these rather odd, albeit delicious, dishes came to be. After all, necessity is the mother of invention! Whether it’s the gatte ki subzi, kachori, daal-baati-churma, laal maas, or saangar – it’s all spicy, scintillating, and seductive. The desserts too are incredibly unique and exquisite.

The people of Rajasthan are inviting and eager to share their culture with the world. All or most of the above mentioned traditions are often up for viewing at the many festivals held by the tourism department every so often. Rajasthan is truly an experience in itself – it would be a shame if anyone missed it.