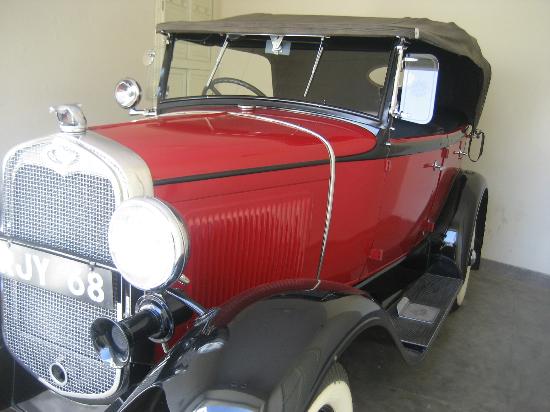 For centuries the city of Udaipur has been known for its many magnificent palaces, its rich heritage, and romantic lakes. However, this city has one hidden jewel that unfortunately many are unaware of – the Vintage Collection of Classic Cars Museum. Opened to the public in the year 2000, this museum boasts of over 20 vintage and classic cars that have belonged to the previous three Maharanas of Mewar. The museum is housed at the Garden Hotel which is conveniently situated at a distance of 2 km from the City Palace. The cars are kept in the original Mewar State Motor Garage, a semi-circular place within a bigger courtyard, which keeps the precious cars away from the hurly-burly of the main street.

The cars on display include a 1946 Buick, a pair of Cadillacs, a Vauxhall 12, a 1930 Ford, a 1959 Morris- Minor 1000. The 1946 MG-TC convertible is a must see for sports enthusiasts. The 1934 Rolls Royce Phantom II limousine was used by Maharana Bhagawat Singh mainly to transport the cricket team to and from the grounds.  In spite of some of these cars being over half a century old, they have been meticulously restored and are in perfect working order. For instance, the restoration work on the Rolls – Royce GLK 21 started in 1999 with experts coming in from Hofmann of Henley UK, a specialist mechanical engineering workshop. A complete repair of the engine and gear box had to be undertaken before it was ready to be driven again. The restoration of the Ford proved to be a challenge but that was overcome with help from the original Ford A Restorer’s Guide.

A few of these vintage cars had even been customized keeping in mind the taste of the Maharanas thus giving them a very Mewar look and feel. Interestingly, one can find a small Burmah Shell petrol pump located near the garage which is still in a usable condition. Another amusing detail is the original number plate of some cars showing simply one or two digits. For the benefit of the visitors, all the cars have a detailed description showing its make, model, year and country of manufacture.

Each car has its own history which the museum’s staff happily shares with the visitors.  There are tales of how a particular car was favoured by a king, which car ferried Queen Elizabeth on her visit to Udaipur, which car drove Jackie Kennedy around and how a car was specially flown to the U.S for the shoot of the film ‘Titanic’. On certain occasions, some of these cars can be seen on the road too. The Cadillac convertible is used by Shriji Arvind Singh Mewar of Udaipur for Dussehra, Holika Dahan and the Ashwa Pooja. The Cadillac Saloon is the Maharani’s personal car.

These cars stand as evidence to the royal choice of the kings and their need to own the best. Although the museum may not seem like a “must visit” destination for non car enthusiasts, it is worth a visit to simply know the way the royal travelled.