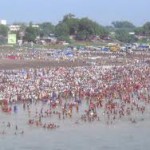 The Chandrabhaga Fair is held annually at Jhalrapatan, a mere 7 kilometers from Jhalawar city, in the south-eastern part of Rajasthan during the Kartika month (October-November) according to the Hindu calendar.

Jhalrapatan is an ancient city and its name literally means city of bells and has an exceptionally large number of temples. Of the early of temples, about four or five still remain and the most famous amongst them is the Sitalesvara Mahadeva temple considered by some to be one of the most elegant specimens of architecture in India. 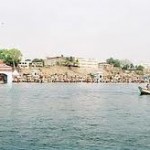 On the banks of the holy Chandrabhaga River, Jhalrapatan is flocked by thousands of pilgrims on the full moon night of the Kartika month; who take a dip in the river at an auspicious spot known as Chandravati.

Similar to the internationally acclaimed Pushkar Mela, a huge cattle fair takes place here during the preceding days where livestock like cows, horses, buffaloes, camels, and bullocks are brought from all over to be sold here. Traders from Madhya Pradesh and Maharashtra patronize this festival in a big way.

This year, the Chandrabhaga festival was held from 9th to 11th November 2011.