The royal state of Rajasthan is etched in the travel books as one of the most romantic locations in the world. Set amidst the Thar Desert, this place has a beautiful landscape that is hard to miss. Known for its enchanting palaces, historic forts and magnificent lakes, Rajasthan is equally popular for its arts and crafts. Some of its signature artefacts are discussed below.

Carpets and Dhurries of Rajasthan 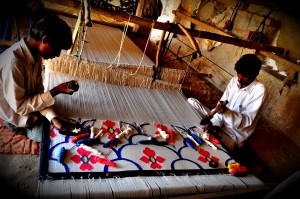 The carpets, floor coverings and hand-woven dhurries made by expert Rajasthani artisans are famous all over the world. They’re exported worldwide and have a huge market, especially in Europe, US and the UK. The dhurries woven by the locals in the rural parts of Jaipur and other places across Rajasthan are made in different sizes and have their own intricate style and patterns.

Dhurries from places like Jaisalmer and Bikaner are made of wool and camel hair. The quaint town of Bikaner is also known for producing Jail Carpets. These carpets are named so because they were originally woven by the prisoners of the jail. Just like the world renowned carpets of Persia, the hand-knitted carpets of Rajasthan have geometric motifs and unique designs that reflect the grandeur of the Rajasthani culture. A predominant feature of these carpets is the peacock motif. 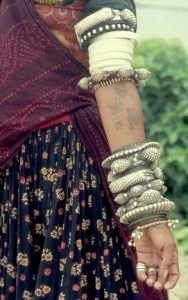 Although there are plenty of different kinds of handicrafts made in Rajasthan that are exported to other countries, not all of these are considered to be antiques. However, there are certain items that have the most distinctive designs and colors. These amass huge demand among the tourists, especially foreigners, who purchase these items as souvenirs or decorative objects. The huge oil jars, painted in the pichwai style, depicting the intimate love scenes of the royals, are a fine example of the antiques of Rajasthan. 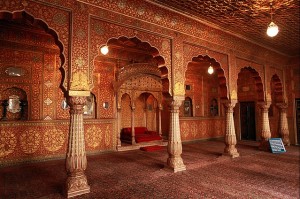 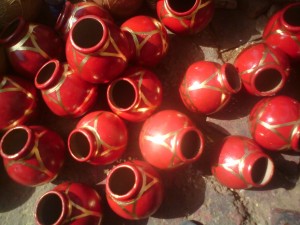 Pottery is a distinguished art form of India and the pottery of Rajasthan has its own unique style. This Royal state of India is known for its blue pottery, which is made of a special kind of clay known as Multani Mitti. The blue pottery came to India from the Mughals and makes use of a special technique, the Chinese glazing technology, for creating its products.