The sun god is an ancient and revered deity in India. Known as Surya or Aditya, vedic scriptures refer to the sun as a storehouse of inexhaustible power and radiance, as the source and sustenance of all life on earth. The origin of the worship of the Sun in India is thus several centuries old.

According to Indian Astrology, a well-located Sun in one’s horoscope indicates intelligence, good health, confidence, leadership qualities, courage, strength, independence, fame, success, power, vitality, and straight forwardness in an individual. But an ill-placed Sun could mean ill health, lack of endurance, low vitality, fear, and dependency. The belief is that Sun Worship is very helpful for those who face problems, hurdles, and misfortune in their lives, and it is also said to be helpful in curing diseases like eye problems, leprosy, heart problems, nervous disorders, asthma, etc.

Though often dwarfed by the immense beauty and size of the Ranakpur Jain Temple dedicated to the first Jain Tirthankar, Sri Adinath; there is an ancient Sun Temple housed within the same temple complex. This temple is dated back to the 8th century and has a similar structure and appearance to the bigger temple. Its walls are also intricately carved with warriors, heroes, and the Sun God in his magnificent stallion-driven chariot.  The architecture of this Sun Temple at Ranakpur has for long intrigued engineers as the massive structure of 60 x 62 meters rises from the side of a hill. 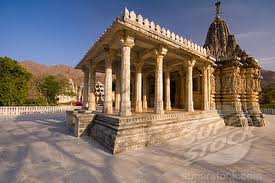 The sun god is especially worshiped on the day of ‘Makara Sankranthi’ which falls sometime in the month of January. It goes without saying that a visit to the Sun Temple at Ranakpur on this day would be worth your while.