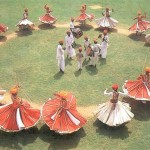 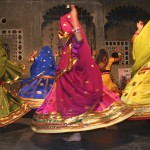 Bright, colourful, and elegant, traditional Rajasthani clothing is always vibrant against the monotonous backdrop of sands and hills. While the clothing is obviously suited for the harshly hot climatic conditions of the region, every item that completes the Rajasthani ensemble, starting from the turbans, clothes, jewelry to even the footwear, helps establish a person’s identity, religion, economic and social status, etc. Take a peek into some of the fascinating and almost festive elements of the Rajasthani costume.

The turban is the most noticeable component of a Rajasthani man’s attire and comes in a variety of shapes, sizes, and colours and all these differences are clearly indicative of the person’s caste and region. Interestingly, even different occasions also call for different styles of turbans. For example, the people of Udaipur wear flat pagaris and those in Jaipur wear typically angular ones. In Jodhpur, the men wear safas with slightly curved bands. While the common man’s turban will ordinarily be of a single colour, the rich and powerful wear turbans with designs and colours to suit different occasions. All in all, over a thousand varieties of pagaris can be found in Rajasthan. A common pagari is usually 82 feet long and 8 inches wide. The safa is usually shorter and broader.

Literally translated into English, angarkha means a body protector. Mostly made of cotton, there are two principal kinds of Angarkhas – Kamari Angarkha which is styled like a frock and reaches the waist, and the regular angarkha which is long and goes beyond the knees. Though most commonly seen in white, sometimes one also finds colourful tie-and-dye Angarkhas.

The dhoti is like a loose Pyjama that covers the lower body. 4 meters in length and 1 meter in width, wearing a dhoti right is a skill that requires reasonable practice. Most commonly, the dhotis are made of very light cotton and are usually white in colour. On special occasions, silk dhotis with zari borders make the outfit festive.

A garment reserved for the upper class and the rich, the patka or the cummerbund is a cotton cloth that usually measures around 1.5 meters in length and 1 meter in width. It was traditionally hung off the shoulder or work around the waist to tuck in weapons in medieval times. Today, remnants of the patka can only be seen amongst Brahmins who wear the traditional “dupatta” on their shoulder.

Traditional styles of dressing have undergone massive changes over a period of time. While most men are now dressed in trousers and shirts, every once in a while, we find that they dress in an interesting and attractive combination of both western and traditional clothing which provide comfort and utility while preserving the cultural identity of the person. 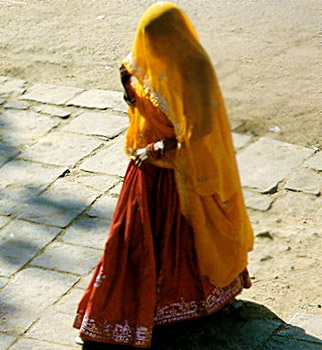 Worn by all Rajasthani women, Ghagras are long skirts that reach up to the ankle. With narrow waists, they flare up towards the base. Unlike skirts found anywhere else, the fabric towards the lower end of the ghagra is not folded in but instead, a broad, coloured fabric known as sinjaf is sewn below to make it strong. The width of the ghagra and the number of pleats are meant to be indicative of the wearer’s wealth. Much like the pagari, the ghagra comes in many styles, colours and prints.

The blouse that accompanies the ghagra, cholis are short blouses which end just below the bust while kurtis are long (almost shirt like) which come down to the waist.

The Odhna is the specialty of Rajasthani costume. Almost like a dupatta, the typical odhna is 10 feet long and 5 feet wide. One end is traditionally tucked into the ghagra while the other end is taken over the head and right shoulder. The colours and motifs found on these are definitively representatives of caste, occasion, and economic status. They can have tie-and-dye work, gota borders, mirror work, and can be a variety of festive colours like orange, red, yellow, and pink. For example, an odhna in yellow with a red lotus motif in the center is called the ‘pila’ and is the traditional gift that parents give to their daughter on the birth of a son.

While the dressing styles of women in urban Rajasthan have completely westernized their wardrobes, the women in the rural, less affluent areas continue to dress in the traditional garb. Variations however have come about in the use of new fabrics, prints, and accessories.

2 Replies to “A Unique Glimpse of Rajasthani Fashion”