Skip to content
Home » A Peek into Rajasthani Music 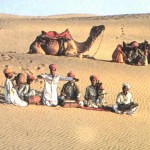 Even those scanning India’s culture from afar will find it easy to assess that its and traditions are vibrant. Rajasthani culture in particular is colourfully heavy in rituals, festivities and grandeur. Every occasion of celebration is accompanied by elaborate food, song, dance, costume and often, worshipping rituals.

Rajasthani Music traditions happen to be one of the oldest in the world, with its origins traced back to the times of the Vedas. Even artefacts from the Indus Valley Civilization (geographically very close to Rajasthan) have representations of dance and musical instruments. Though these references and representations indicate the existence of the classical Hindustani music tradition, Rajasthan folk music tradition was a thriving industry at one point of time.

In Rajasthan, music traditions are shared with neighbouring regions not only in India but also the Sindh province in Pakistan. Being a major centre for Rajasthani folk music, there exist many castes of musicians in the Rajasthani society, for example, langas, saperas, bhopas, jogis and manganiars. 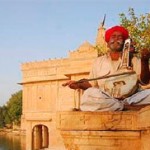 Amongst these communities of musicians, two groups that stand out exceptionally even today are the langas and manganiars. Both communities consider themselves to be the descendents of the Rajput caste and are known as creators of some of the finest music in the Thar Dessert. Their songs are passed on from generation to generation making them precious reservoirs of oral history of the region. In fact, they continue to sing songs about Alexander the Great, other local maharajas and battles fought around the dessert in the past.

Both communities are Muslim by religion and have survived through the centuries on the patronage of wealthy merchants, landlords and aristocrats. Interestingly, often their songs are in praise of Hindu deities and they celebrate Hindu festivals like Diwali and Holi. The manganiars especially, evoke Hindu Gods like Krishna before the start of every performance and are a

part of every festivity in their Hindu patron’s household. The major difference between the two communities lies in the fact that while the manganiars have expanded their style of singing and their audience to other sections of society, the langas mostly prefer to be patronized by the Sindhi-Sipahis, a community of Muslim Rajputs.

While it’s difficult to catch a performance by the langas, the manganiar community is mostly settled in the districts of Barmer and Jaisalmer, along the border with Pakistan.