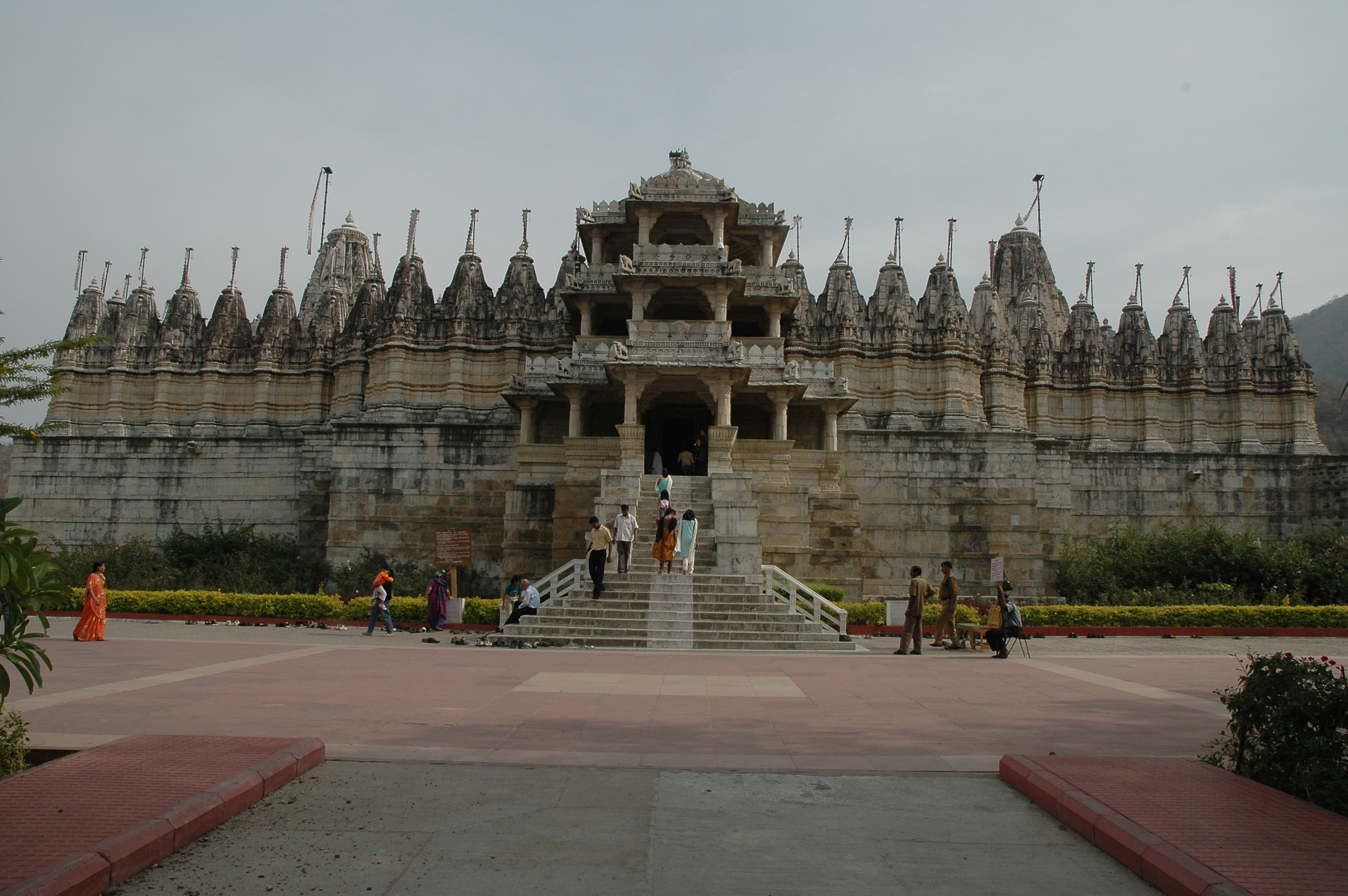 The region surrounding Ranakpur in Rajasthan is densely populated with temples which are sure to take your breath away. Read on to learn more:

This Shwetambar Jain temple built in the 15th century has more than meets the eye. Quite literally, once you climb the stairs and step beyond the main courtyard, a majestic grandeur like no other will grace your eyes. The main temple is dedicated to Lord Adinath, the 1st Jain Tirthankar, his 4-direction facing statue or Chaumukha Idol is housed in the main garbha griha. With intricate carving in its more than 1400 pillars and courtyard ceiling, it is only the floor that boasts a simplicity. Each direction that you turn in is planned meticulously by the Dharna Shah who oversaw the construction with aid from the Mewar ruler, Rana Kumbha after whom the city of Ranakpur is named. Standing at any particular spot will spring upon your eyes the many idols of the 24 Tirthankaras situated in idyllic chambers; some idols larger than the others and some as tiny as a small grain of rice, a mere reflection of the lord’s greatness even in smaller things. Nothing short of an architectural wonder with it’s geometrical pillars all in alignment, this temple is a must visit. With many interesting legends about the temple’s construction like no pillar has the same design and why a pillar till date remains incomplete will leave you with an enchanting tale. Along with the Jain temples at Nadol, Narlai, Varkana and Mucchala Mahavir it forms the Gorwad PanchTirthi, a sacred yatra.

It is near Sadri Town and is situated in the Pali District of Rajasthan. Falna is the nearest railway station about 35kms. One of the closest and best hotels to stay nearby is the Mana Hotel, Ranakpur; it is one of the best resorts in Rajasthan.

There is a Sun Temple near the main temple dating back to the 13th century and reconstructed in the 15th century. This Sun Temple is maintained by the royal family at Udaipur.

A legendary Shwetambar Jain temple of the 24th Jain Tirthankar, Lord Mahavir that will leave visitors in awe with its tale of devotion and belief. Dating back to the 10th century it is on route from Falna to Kumbhalgarh, it is renowned for its annual fair held on the 13th day of the month of Chaitra in the Hindu calendar. Visitors stop by here, as this is one of the places to visit near Kumbhalgarh.

The tale of the temple surrounds the old plebeian priest of the temple and the Rana of Mewar who visited one day. Offering a drink of refreshment to the Rana became a life and death matter for the priest as the drink contained a strand of his white hair. Knowing that his life would be in danger for this simpleton error, the priest maintained a joke saying the strand was his Lord’s. Willing to take a raincheck, Rana made a promise to visit in the next few days to check if the idol of the Lord really had a moustache. The priest contemplated ending his life when he had a vision that told him to cover the idol and ask the Rana to offer prayers first upon his visit. Doing as he was told, the priest prepared for the king’s visit. Rana was enraged to see a cloth covered idol, but after prayers when he removed the cloth he was amazed to see the Lord Mahavir supporting a real moustache. And as they say the rest is history! With easy access to hotels near Kumbhalgarh Fort, this place is a must visit.

As the name spells it, this temple’s exterior walls, rooftop and pillars are all covered in gold. It is home to the idol of Lord Parshwanath, the 23rd Jain Tirthankar and is known as the Lord Shankeshwar Parshwanath. The temple’s golden structure was made from more than a 100kg gold donated by the Jain community. It’s artistic beauty also reflects in a glasswork temple known as the “Kanch Mandir” built below the main temple. Though it is a small temple, it is a must see and comes in close proximity to hotels in Ranakpur.

As one of the places to visit in Kumbhalgarh this Shiva Temple is located in a cave at the foothills of the Aravallis. Legend has it that the hillside was carved by the Lord Parshuram(Avatar of Vishnu) himself with his axe. It is believed that Parshuram had performed austerities for many years inside this cave and this place bears witness to a monster-like print on a rock in the cave that is supposed to have attacked Lord Parshuram. With natural mounds of Lord Shiva, Lord Ganesh and nine kunds that never dry, this temple is highly revered by Hindus. There are about 500 stairs made on the terrain leading towards the entrance of the temple from the Sadri side. There are two annual fairs held here around the months of August and September. Situated about 3600 ft above sea level, this temple can be accessed by road as it is in the Rajsamand district near Kumbhalgarh and is about 14kms from Sadri town, 98kms from Udaipur and 160kms from Jodhpur.

A disputed yet ancient temple that houses the idol of the 1st Jain Tirthankar, Lord Adinath also known as Lord Rishabhdev; in this old village the Lord is renowned by the name of Keshariyanath. With narrow dusty lanes leading upto the main temple, this place is revered by Jains (Shwetambars and Digambars), Brahmins who worship it as an idol of Vishnu and the Bhils(the local tribes of this area) who also offer prayers. The idol is said to be about 1200 years old, is black in colour and legend has it that it was discovered underground after a cow poured its milk over that earth. Due to the enormous amount of Saffron/Kesar that is offered to the deity daily, it got its name as “Keshariyaji.” The temple dates back around before the 15th century and is also home to many priceless treasures. With a diamond aangi/dress of the lord made of 80kg gold, it also hosts antique riches collected over these many thousands of years that were offered by devotees.

Photography is strictly prohibited here, but one can only witness the grandeur of this highly esteemed idol in person and save as a memory for a lifetime!

Go here for the rural experience of a place stuck in time and it is not too far from the main highway while yet close to resorts near Udaipur.