India is a fantastic land of varied cultures and traditions. Each region of the country can be identified by its unique culture which is amply reflected in the various art forms of that region. Folk music and dance are integral parts of the art forms of different regions. True, that these folk dances are not as complex as the classical dance forms but they still have a tremendous aesthetic appeal and can leave the watchers spellbound. These dances are performed with full rigour on almost every special occasion and festival. They convey a sense of joy. These dances also have religious significance and many of them are considered to be auspicious with many of them are dedicated to the presiding deity of the specific community. The attire used during the performance of folk dance is of great importance. Every folk dance has its own specific costume.  The jewellery and costumes bestow a great deal of charm to these dances.

Let us find out more about some of the prominent folk dances of India: diya is the folk dance of Gujarat which becomes a national rage during the time of Navratri. The name garba is derived from the Sanskrit term Garbha. It is characterized by great passion and joy. Dressed in colorful costumes, young men and women play dandiya gracefully, by holding big sticks in their hands (used as the prop for the dance). Girls and women wear Chaniya choli and the boys and men sport kafni pyajamas with a kediyu (a short round kurta).

Bhangra is the tradition 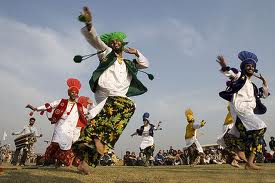 al folk dance of Punjab which is so captivating that it becomes an instant hit among people in different parts of the country (and even abroad). Bhangra is done with classic style Punjabi dresses, and with instruments including a Dhol, Chimta, Tabla, etc. Originally performed around the time of Baisakhi (to celebrate the harvest), it is now a popular form of celebration at any time such as weddings and festivals. Gidha, a dance performed by the women of Punjab, is on the lines of Bhangra and complements the latter.

Developed by the Bhil tribes of Rajasthan, Ghoomar is a traditional women’s folk dance that is now popular among other Rajasthani communities as well. It is performed by groups of women in swirling robes, and accompanied by men and women singing together.  It is performed on various auspicious occasions like fairs and festivals. Ghoomar comes from the “ghoomna” (swirling) of ghaghra a long skirt of the Rajasthani women. The performers in Ghoomar dance sway their colorful ghagras that are rich in embroidery work and also embellished with mirror-work making the dance a splendid amalgamation of grace and enthusiasm.

Bihu Dance is the folk dance of Assam and is relate 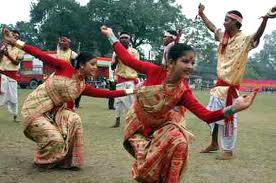 d to the festival of Bihu. It’s a joyful dance which is performed by the young men and women during the daytime in open. Brisk dance steps and rapid hand movement are the two chief characteristics of the dance. The folk dance cuts through all the religious, caste and class barriers of the different kinds of people living in Assam. Drums and pipes are played during the performance as the performers dressed in Dhoti, Gamocha, Chadar, and Mekhala (Indian dresses) sing of love of during the act.

These are the dances perform 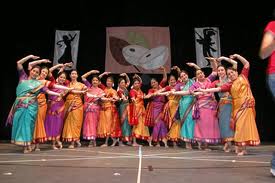 ed by the tribal women of Tamil Nadu during certain festivals. Kummi is a very simple form of dance, where dancers form circles and clap as they dance. Kolattam is an extension to Kummi and instead of clapping the dancers hold wooden rods in their hands and strike them with each other (in rhythm). The name Kolattam has been derived from Kol (a small stick) and Attam (play), describing its very nature. On average, a Kolattam dance group is composed of 8 to 40 dancers.

One Reply to “Top Folk Dances in India”