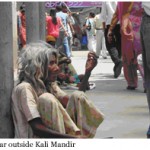 As a part of my effort to explore my city, Purani Dilli is located in Delhi, I decided to visit Chandni Chowk. My tour began with a ride up the steepest escalator I’ve seen and as I walked out of the metro station, I was hit by a vibrant aroma of life (and by that I mean the mixed smells of burning oil, jute bags, cardboard cartons, and whatnot)! The first sight that meets the eye is not soothing either – a line of diseased and deformed beggars sit outside the Kali Mandir with hands stretched and eyes watering in a practiced manner. 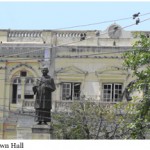 I moved into a narrow and overcrowded lane that leads to the main Chandni Chowk street right in front of Natraj Chat Bhandar, which by the way, is famous for its Dahi Bhallas. To my left, I could see the Red Fort at a distance and the street stretched in an unending crowded market on both sides. Strolling down the street while rubbing shoulders with hundreds of men and avoiding calls of cloth merchants, I took the left towards Nai Sadak, a one-stop market for all professional, school, and college books. Right in front of the entrance to Nai Sadak is the beautiful yellow Town Hall building, dotted with countless pigeons, and further into the street, I found food stalls at every few steps offering all sorts of mouth-watering delicacies and tempting thirst quenchers. 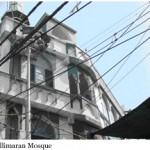 Turning into a random lane that could be easily missed, I found my way into Ballimaran, a predominantly Muslim neighborhood, famous for its spectacle shops, Juttis, bangles, and the delectable mutton nihari. I stopped for a cup of tea at a stall in an unimaginably narrow lane. Sitting on a battered old scooter, tea-cup in hand, I could hear the serene voice of Rafi coming from a cassette player playing in the house across the road. As I moved aimlessly, I realized I had ventured into an exclusively residential place with Galis that can accommodate no more than two people standing together. Stealing glances into the homes, I watched skull-capped kids playing cricket and marveled at the beautiful wooden doors and balconies; and somehow found my way through the maze of Galis into the marketplace again. It is all so enclosed and entangled that one can help but wonder at the origins of such a settlement. But the answers are buried deep with a 300-year-old history.

In order to understand the place better, I started a conversation with Mohd. Nasir Khan, a 29-year-old trader who runs his own optical shop. A St. Stephen’s graduate, Nasir said that living in the walled city links him with a rich heritage. With immense pride, he said though the area housed people of different religions, Ballimaran was extremely peaceful and very safe for women. He also said that the people here are inherently fun-loving ensuring that the area was never free of noise. The only problem he faces is the congestion and traffic on account of the innumerable rickshaws, hand-pulled carts, and the rush of frenzied visitors, shoppers, and tourists. It takes Nasir roughly 35 to 40 minutes to reach his house in Ballimaran from Red Fort, that’s enough time to reach Connaught Place from Gurgaon! 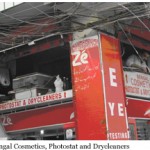 Apart from the beautiful place, some images struck me as curiously funny. For instance, in a residential by-lane, where not more than one person can walk straight, a Kulfiwala with his Thela can maneuver his cart with great ease. Another example is a shop called Bengal Cosmetics, Photostat, and Drycleaners. If the combination of services provided is not unusual enough, it is placed on top of an optical shop and is no more than 3 feet in height. The customers stand below while the trader spends his entire day lying down and they communicate through the slit-sized opening!

My next stop was Mirza Ghalib’s haveli in Gali Quasim Jaan. Ghalib, the legendary Urdu poet of all times, lived, drank, wrote, and breathed his last here. Here I read some extraordinarily painful Shayari and looked at his memorabilia. I also found a cloth and bullion market where traders sat comfortably on crisp white sheets and pillows as the shoppers flick through items to make their purchase. Some shops were as small as the passenger seat of a car (and I am not exaggerating)!