Ever wondered how it would be to have just one season, and that too the monsoons? Cherrapunji or Sohra as it was historically called, is a misty valley with sparkling rivers and swirling clouds; and is a perfect summer getaway, receiving 4600mm of annual rainfall. The abundance of rainfall results in exquisite flora and fauna, gorgeous limestone caves, the fast waterfalls and greenery all around that makes Cherrapunji a heavenly destination for tourists. Cherrapunji looks the best in the monsoon months with the heavy dark clouds kissing the Khasi hills and the deluge resulting in some spectacular waterfalls.

Let’s discover some of the famous tourist destinations in Cherrapunji:

Standing tall at 1099 ft, the Nohkalikai waterfalls are one of the highest in India. Situated a few kilometers away from Cherrapunji, the waterfall makes for a spectacular view in the monsoons.  According to legend, the name has been derived from a story of a local girl Ka Likai, who committed suicide by jumping off the cliff near the water fall.  Hence in Khasi language, Nohkalikai means “Jump of Ka Likai”. The stream is calm at the beginning and then gushes down with a tremendous force forming a huge and green plunging pool. The whole sight is just magnificent.

Mawsmai or Nohsngithiang falls, as the l

ocals call it, is the forth highest in the country at a height of 1035 ft. It gushes down in steps from the treacherous limestone cliffs of the Khasi hills. It is also aptly known as the “Seven Sister Falls” as the cliffs cut the water into seven segments that plunge down into a deep valley. The most unique feature of this splendid fall is that, it gets illuminated by the sun’s rays making it a sight one can never forget. 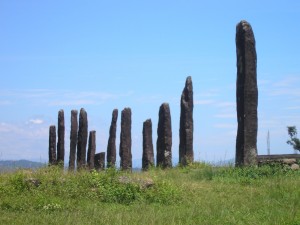 Not far from the Mawswai waterfall are Khasi Monoliths which are stones laid down by the tribes in memory of their ancestors. Along with that, there are underground passages which will very well interest adventure enthusiasts. 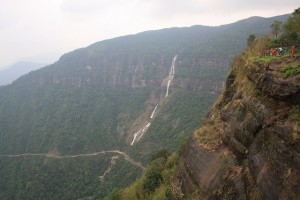 from Cherrapunji is the Thangkharang Park from where one can get a heavenly peek into Bangladesh. The never ending plains with rivers cutting through them look splendid to say the least. Across the park one can also see the Kyrnem waterfalls. Situated at a height of 998ft this fall is famous for its height. Another impressive feature at the Thangkharang Park is Koh Ramnah, a 200 feet natural rock formation in the shape of an inverted basket.

Above the River Umshaing is the famous Double Decker Root Bridge. It is 100m in length and famous for being a natural bridge grown out of roots of Ficus elastica tree (Indian rubber tree). At one point of time the bridge can carry more than 50 people. This bridge is more than 500 hundred years old and gets stronger day by day.

By Air- Nearest airport is Guwahati airport which is around 181kms from Cherrapunji. Along with that Pawan Hans helicopter Limited, has provided a Dauphin helicopter to the Government of Meghalaya, which runs on runs on Guwahati- Shillong- Tura route.

By Road- Frequent buses and taxi services are available from Shillong which is the distance of 60 km from Cherrapunji.

By Rail- Nearest railway station is Guwahati Junction which is 3hrs away from Cherrapunji. After that one can take a bus or taxi from Paltan Bazaar situated behind the railway station.