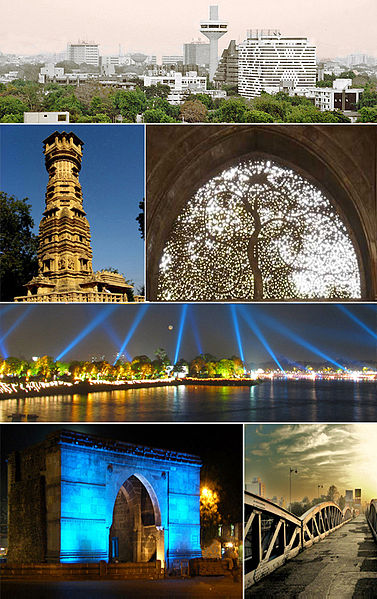 The city of Ahmedabad was founded in 15th century AD and draws its name from Ahmed Shah, the medieval ruler of Gujarat. Flanked by River Sabarmati, the city is an exquisite blend of the traditional and the modern. The present-day Ahmedabad is a bustling metropolis of Western India. It is a prominent business center and an emerging seat of high-quality education, scientific industries and information technology in the country. The city has been renowned for its industry since medieval ages. In the present time, it is home to several textile mills which has earned it the title of ‘Manchester of the East’.

Like other old Indian cities, Ahmedabad too is composed of an old city and a new city. One can find many different moods in Ahmedabad. From the hustle-bustle of the busy C.G. Raod right in the heart of city to calmness of the Sabarmati Ashram, the city is vivid and unique it its own way. In terms of culture, the city boasts of a rich heritage. It is the epicentre of Gujarati cultural activities and one can witness diverse traditions of different ethnic and religious communities in the city. The traveller can also treat his eyes to magnificent pieces of architectural marvels which fuse the Hindu and Islamic style.

Available archaeological evidence points out that inhabitations have been there in the area around Ahmedabad since the 11th century AD. Back then it was known as Ashaval (or Ashapalli). It was at that time that Karandev I, the Solanki ruler of Anhilwara won a war against Bhil King Ashaval and after that established the city of Karnavati on the banks of the Sabarmati River which later became Ahmedabad in the medieval era.
Major Tourist Attractions 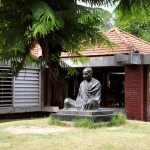 Mahatma Gandhi Ashram is one of the most popular attractions of the city. Among Islamic monuments, the tombs of Ahmed Shah and his queens, Jama Masjid, Mosque of Sidi Sayid, Teen Darwaza or Triple Gateway, Siddi Bashir Mosque, Rani Rupmati’s Mosque, Rani Sipri’s Mosque, and Raj Rabri Mosque are the major monuments.

Hatheesing Jain temple attracts lakhs of Jain devotees. Ahmedabad is also home to beautiful gardens and lakes. Law Garden, Victoria Garden and Bal Vatika are some of the most popular gardens in the city. Bal Vatika is a children’s park situated on the edge of Lake Kankaria, a man-made lake built in 1451 AD, which itself is a popular tourist attraction. The water park and the amusement park here are a delight for both children and adults. Ahmedabad’s Kamla Nehru Zoological Park houses a number of endangered species including flamingoes, caracals, Asiatic wolves and chinkara. 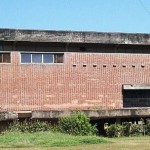 Recently, Ahmedabad Municipal Corporation completed the Sabaramati Riverfront Development Project which has beautified the riverfront turning it into a tourist draw. Legendary French architech Le Corbusier designed several buildings in the city. The Sanskar Kendra, one of the buildings designed by him, beautifully portrays the history, art, culture and architecture of Ahmedabad. 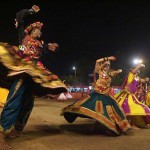 There are several areas in Ahmedabad which are renowned for different types of folk arts. For example, the craftsmen based in an area called Rangeela pol make tie-dyed “bandhinis”, while the cobbler shops of Madhupura sell traditional mojdi footwear.
Uttarayan, the annual kite-flying festival is observed on the occasion of Makar Sankranti on January 14. Navratri, the nine nights dedicated to the worship of Goddess durga are celebrated with great pomp and joy. Garba, the the folk dance of Gujarat is a major part of Navratri celebrations.