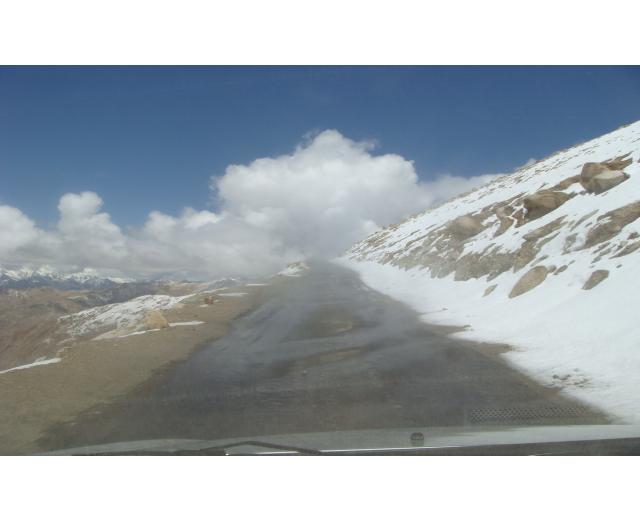 Webster would run short of adjectives to define Leh, a place that blew me away with its warm people and its cold, raw natural beauty. This was Leh, a wild mountain not to be confused with the wimpy hill stations of Mussoorie or Shimla. This was an adventure called Ladakh.

Juleh. The Ladakhi greeting that is more often than not accompanied by a smile that warms you up despite the chilly wind. The Ladakhi people are warm; peace loving and simple – the stuff God intended man to be. I was welcomed by this very heartening Juleh and a khadak – a Buddhist Silk scarf given to people as sign of respect.

Preparations began 5 days before I boarded the flight that flew me in directly to Leh. Forewarned about the dangers of altitude sickness, a real killer at 18,000 ft, I was told to take DIAMOX (A wonder drug) to better acclimatise to the conditions. A pair of sunglasses (to protect against snow blindness) and a strong sunscreen (Leh is the only place you can get sun burnt AND frost bite) are a must as well. Needless to say, my suitcase was filled with woollies!

Leh has something for everyone.

For the spiritually inclined, the monasteries of Thiksey, Hemios, Spitup, and Lamayuru provide perfect refuge. Most monasteries have guest houses where visitors may stay and participate in Buddhist rituals with the resident monks. These monasteries offer great insight into the culture of Leh with their museums holding treasures of tourist interest. Religion plays an important part in Leh’s culture and it is advisable to be careful to not disrespect any sentiments.

For the adventurous; Leh offers a plethora of activities. From battling the white water rapids on the mighty Indus to treks that I was too scared to even enquire about, Leh is an adrenaline junkies’ ultimate fantasy! Take a bike ride the mountain ranges, camp at the most scenic spots and you’re sure to have a trip to remember! Even driving to Khardungla, the world’s highest motor-able road at 18k feet above sea level is an adventure.

For the foodie, Leh’s cuisine is appetising though some may find it a little bland. The mok mok (a stuffed steamed meat dumpling) is absolutely orgasmic. The Apricot jam, a local delicacy makes for a great breakfast. There are also many small restaurants in the Leh market that serve up great international cuisine. However non-vegetarians will not find meat in guest houses at Alchi, Nubra or Pangong since it is tough to transport animal protein there.

However, Leh reserves its best for the nature lovers. Every turn on the treacherously high passes yields a sight that literally takes your breath away. Sandwiched between the Karakoram and the Himalayan mountain ranges, Leh provides the shutterbug with ample photo ops. The Moon Land near the Lamayuru monastery looks alien and one can’t help but hop around pretending to be Neil Armstrong! Leh is probably the only place in the world where you can capture snow capped mountains, a desert and a water body in one frame! Pangong Lake is magnificent and few are brave enough to take a dip in its bone chilling water. I would suggest staying the night in a tent at Pangong and catching the sunrise. The desert at Nubra valley is home to the famous Double Humped Camel and riding the sand dunes on one is a memorable, though back-breaking experience.

When at 18000 feet, children go to a government school and are being educated well, I feel proud to be Indian. When in a remote Ladakhi village I can flip out my BSNL phone and call my grandmum; I know this country is going places. When I see our well equipped army protecting our borders even at freezing temperatures; I feel a sense of gratitude.

Leh is beautiful. There are no questions about it.