Kanyakumari, the town which marks the end of the geographical mainland of the Indian peninsula is indeed exotic. Also known as Cape Comorin, the place is filled with truly wonderful tourist spots and has a history and cultural heritage that are profound. The place derives its name from the Hindu Goddess Kanyakumari, also called Kumari Amman.

According to a Hindu legend, Kanya Devi, an incarnation of Goddess Parvati, was to marry Lord Shiva who couldn’t show up on his wedding day. The rice and other grains meant for the wedding feast thus remained uncooked and turned into stones over time. It is believed that the rice like stones found on the shore today are the same.

It is also widely believed that Lord Hanuman dropped a piece of earth here when he was carrying a mountain of life saving herbs from the Himalayas to Lanka during the Ram-Ravana war. This piece of earth is now known as Marunthauvazh Malai which means “hills where medicine loves” and is also supposed to have been home to Sage Agasthya, a specialist in medicinal herbs.

Kanyakumari has been a seat of art, culture and religion for ages. Ruled by various dynasties, the place has been a flourishing centre of trade and commerce. Swami Vivekananda, the great India spiritual leader spent many days at the place.

Let’s discover some prominent tourist destinations in and around Kanyakumari

The Kumari Amman or the Kanyaku 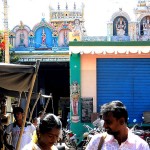 mari Temple, sitting on the shore, is a Shakti Peetha. The temple is dedicated to a manifestation of Goddess Parvati, the virgin goddess who did penance to obtain Lord Shiva’s hand in marriage. The temple attracts lakhs of devotees every year. The sparkling diamond nose-ring of the deity is said to be visible even from the sea. 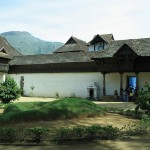 am Palace is the 17th century palace of the Travancore kings which is made entirely of wood. The Padmanabhapuram Palace draws hundreds of visitors every day continuously. Spread in an area of 4 km and situated at the foothills of the Veli Hills, the palace offers some stunning views.

Built on a ro 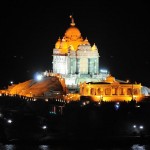 ck where Swami Vivekananda sat in long meditation, the Vivekananda Rock Memorial stands gloriously amidst the sea and can be accessed through a ferry service. Built in 1970, the memorial stands on top of two rocks that are situated approximately 500 meters off the island. It is said that Swami Vivekananda attained enlightenment on the rock, and henceforth became a reformer and philosopher. 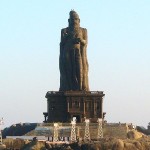 s sheer magnificence. The statue is a 133 feet (40.5 m) tall replica of the Tamil poet and saint Thiruvallauvar and weighs about 7000 tons. It was constructed atop a small island near the shore of Kanyakumari where two seas and an ocean meet: the Bay of Bengal, the Arabian Sea, and the Indian Ocean. Thiruvalluvar Statue was sculpted by Dr. V. Ganapati Sthapati and was designed to be a beacon of art for the whole humanity. 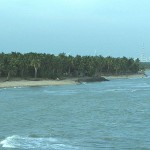 By Air: Nearest Airport is Trivandrum International Airport which is 87 km away from Kanyakumari.

By Rail: The Kanyakumari Junction is barely a kilometer away from the central bus stand. The major railway station near Kanyakumari is Trivandrum Central, which is connected to all parts of India by rail.