Five Monuments in Rajasthan up for World Heritage Status

Monuments are a defining aspect of Rajasthani culture, heritage and architecture; and for that matter everything Rajasthan. These majestic structures bestow such an unparalleled grandeur to the state that they easily become the envy of all other states in India. Five monuments from Rajasthan have recently been recommended to UNESCO for world heritage status. Below we make an attempt to appreciate the grandiosity of these five truly amazing structures: 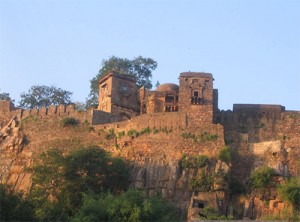 Ranthambore Fort: A formidable structure situated within the bounds of Ranthambore National Park, the Ranthambore Fort has been a focal point of several major developments in the history of Rajasthan. It is situated near Sawai Madhopur town in Rajasthan and is known for the glory and valour of the brave king Hammir Dev of Chauhan dynasty. Situated atop a hill, the fort offers a panoramic view of the National Park. This fortress was constructed in 944 AD by Nagil Jats. Strategically located, it comprises massive gates, lofty walls, tanks and temples. The only entry to the fort is through these lofty gates that encompasses so many defence mechanisms. Inside the fort there are three Hindu temples dedicated to Ganesh, Shiva and Ramlalaji constructed in the 12th and 13th centuries from red Karauli stone. There is also a Jain temple of Lord Sumatinath (5th Jain Tirthankar) and Lord Sambhavanath. 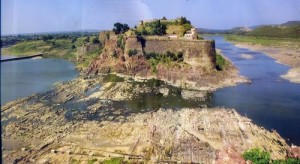 Gagron Fort (Jhalawar Fort): The Gagron Fort in Jhalawar is great embodiment of Rajasthani architecture in terms of design, structure and strategy. Add to this the charismatic stories of Rajput chivalry. It is the only fort which is surrounded by water on all four sites.  It is surrounded by the Ahu and Kali Sindh rivers on three sides. The fourth is a moat: a ditch filled with water to protect the fort against any infiltration and assault. The fort is hence known as ‘Jaldurg’. The foundation of this magnificent fort was laid around 7th or 8th century AD. It served as a capital of Khichi Chauhans. Outside the fort there is the mausoleum of a Sufi saint, Mitte Shah, where a fair is organised every year during the Islamic month of Ramzan. 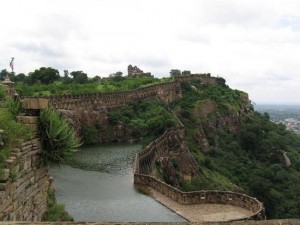 Amber Fort: Amber Fort is located in the small town of Am 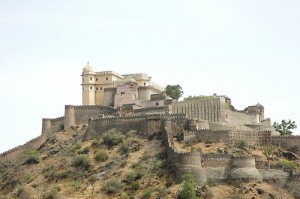 halgarh is an ancient Mewar bastion which stands majestically amidst a picturesque landscape in the district of Rajsamand in Southern Rajasthan. Situated just 82 km towards Northeast of Udaipur, the tourism capital of Southern Rajashtan, the fort was erected by Rana Kumbha (hence the name Kumbhalgarh) in 15th century AD. From the top of the fort one gets a bird-eye’s view of the countryside. Encircled by thirteen elevated mountain peaks, the fort is constructed on the top most ridges around 1,914 meters above sea level. The wall fortifying the fort is 36 km and this makes it the second longest wall in the world after the Great Wall of China.  The huge complex of the Fort has numerous palaces, temples and gardens making it all the more magnificent.